Another cruise ship has been struck by a norovirus outbreak that has sickened about 250 guests and staff so far. Full Story 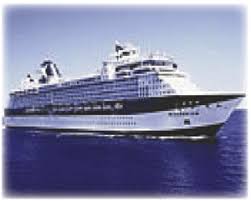 Indeed, Celebrity spokesman Michael Sheehan has confirmed the outbreak, albeit with slightly lower numbers. From Celebrity’s report: “Over the course of the sailing, 176 of the ship’s 2,242 guests [8 percent] and 22 of its 957 crew members [2 percent] experienced the illness, thought to be a Norovirus brought onboard by a guest previously exposed to it. Those affected by the short-lived illness responded well to over-the-counter medication administered onboard the ship.”

Celebrity has reported the outbreak to the United States’ Centers for Disease Control and Prevention as is required when at least three percent of passengers are stricken.

In an effort to halt the spread of gastrointestinal illness onboard, not to mention in ports of call, Celebrity Cruises has upgraded its cleaning protocol in conjunction with CDC guidelines. This includes the use of far more potent antiseptic supplies, and the addition of two doctors and two nurses onboard.